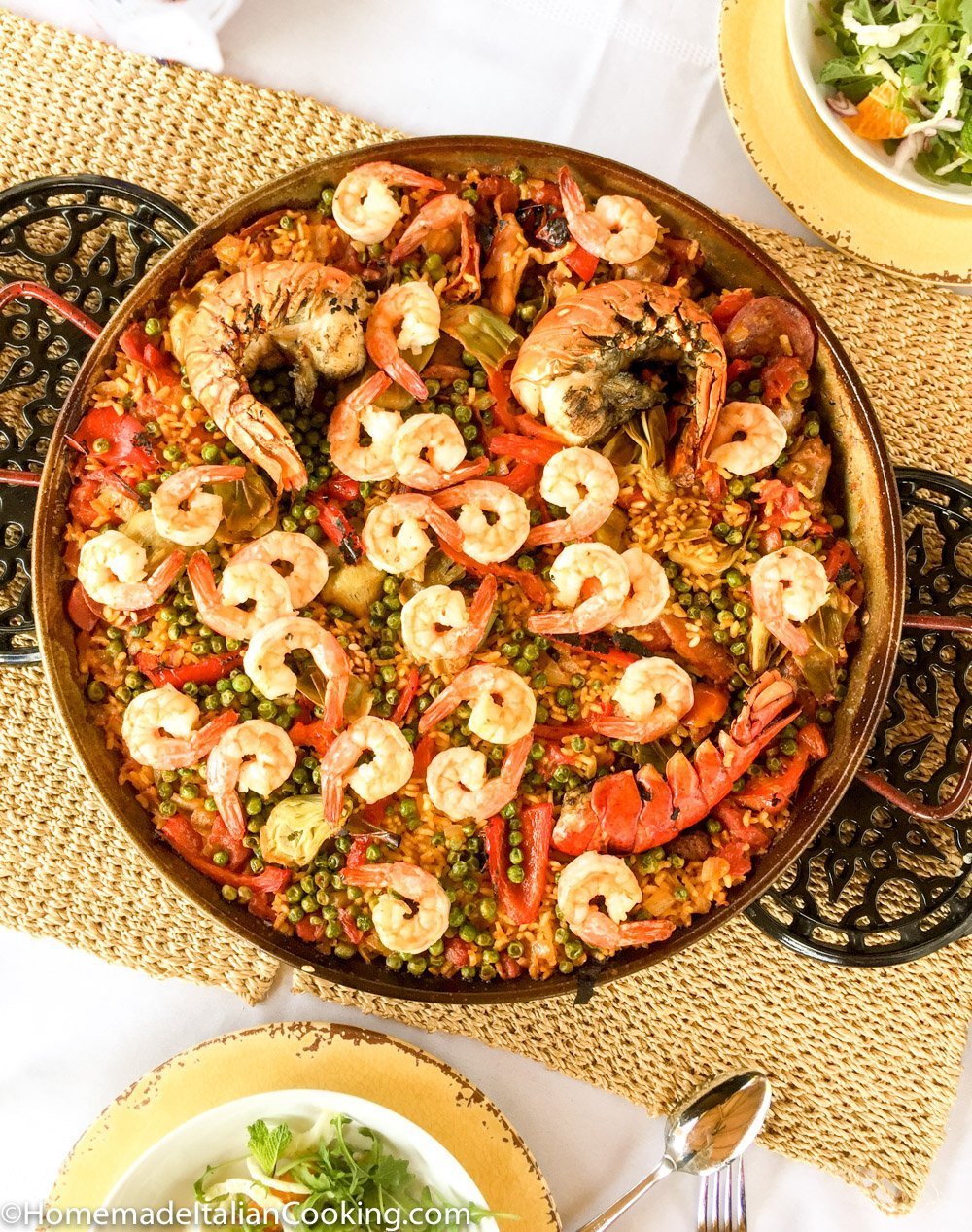 Spanish Paella is an amazing and easy homemade meal! Layers of seafood, sausages, chicken thighs, vegetables, rice, and spices are amazing when cooked on a outdoor grill.  I served this for an afternoon lunch on the patio while my guests sipped on white wine, and ate nibbles. They helped and watched the magic happen as layers of food were added one at a time to create an amazing blend of Spanish deliciousness. You will need at least a 16-18" paella pan (click the link to purchase) or a large wide shallow pan. Get all your ingredients "mise en place" and start cooking. It takes about an hour or so from start to finish. Serve a crisp salad such as my Orange, Fennel, & Mint Salad with Citrus Vinaigrette, and keep the Sangria flowing.

Like debates on the best Italian Lasagna, there are so many versions and opinions on Paella. This Paella recipe is my version with chicken thighs, Italian sausage, chorizo, shrimp, lobster tails, peas, red bell peppers, and artichoke hearts. Use Aborio rice if you can't find the traditional Spanish Bomba rice.  This recipe is mild, however you can easily spice it up by adding more smoked paprika and red pepper flakes to taste. One important tip for Paella is to use dried-cured Spanish Chorizo sausage and not the Mexican version which are fresh sausage links. I used pre-packaged thin slices of chorizo, like pepperoni, since that was all I could find at my local grocer.  You can also order some fabulous cooked chorizo sausages from D'Artagnan which I will do since I plan to make this again this summer. In that case the chorizo is diced into small chunks.

Here is a visual guide to making Paella on the Grill:

Cook chicken thighs, shrimp, and chorizo in a hot Paella pan on the grill.  Cook lobster tails on direct heat. 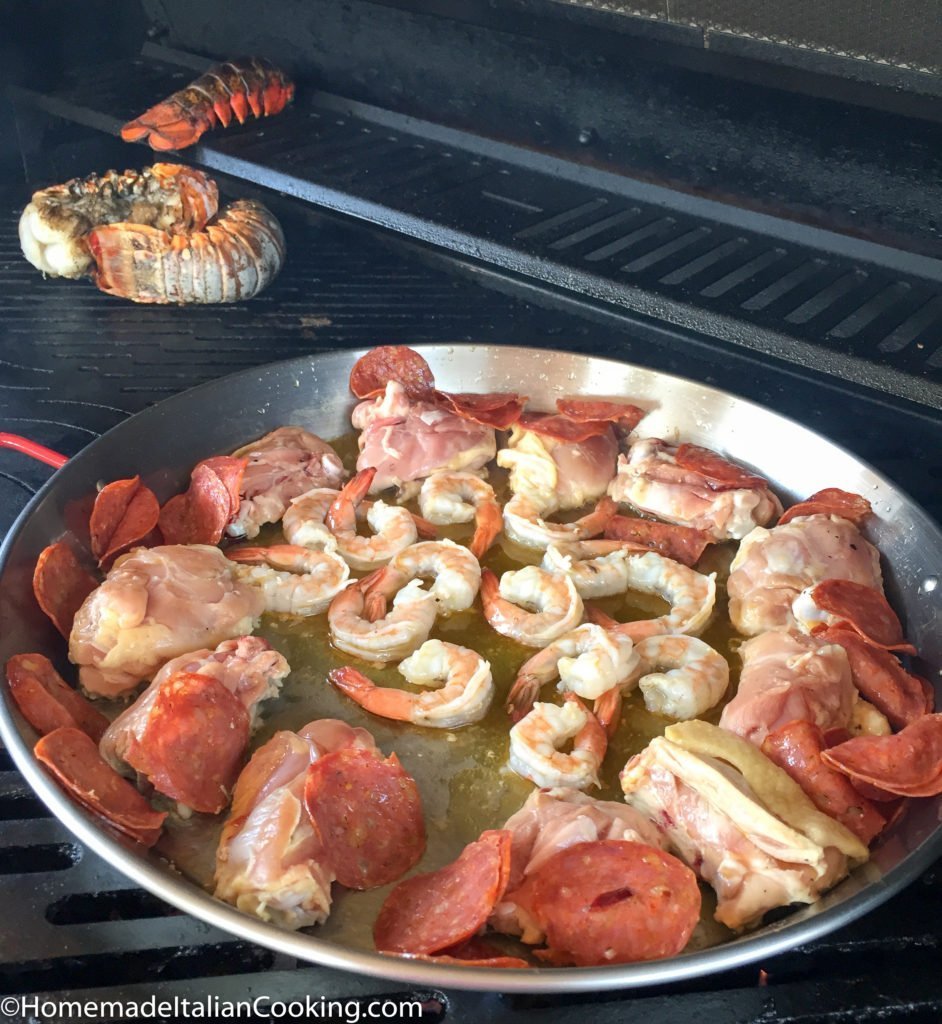 Remove seafood just before its done and set aside with crispy chorizo. 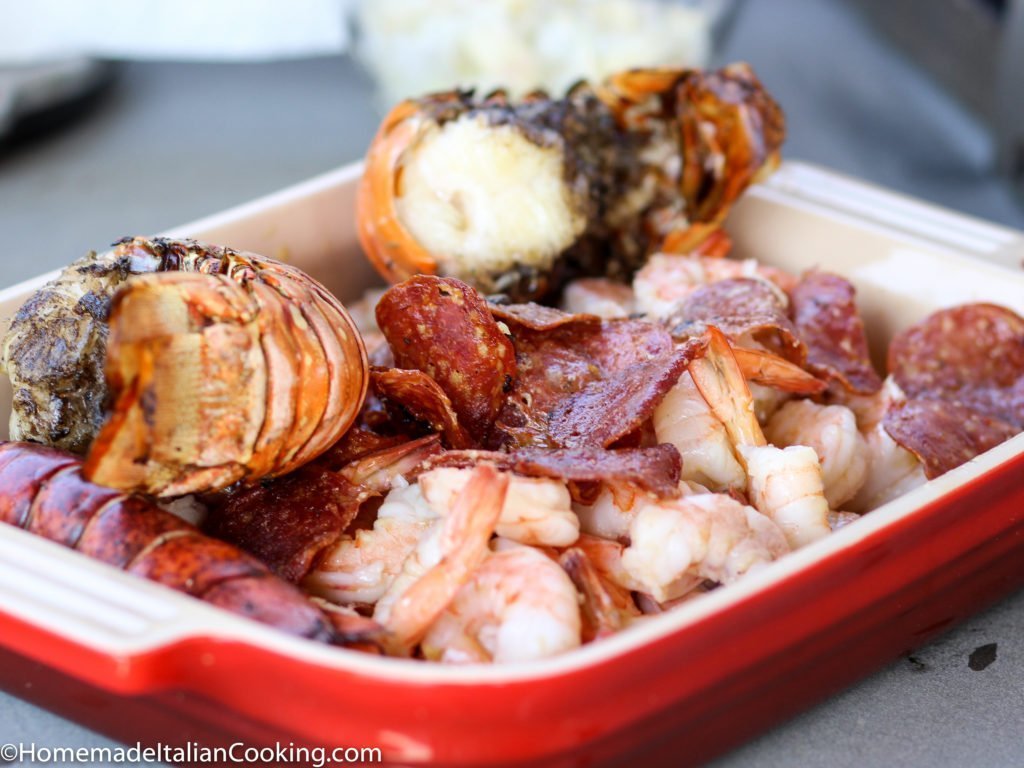 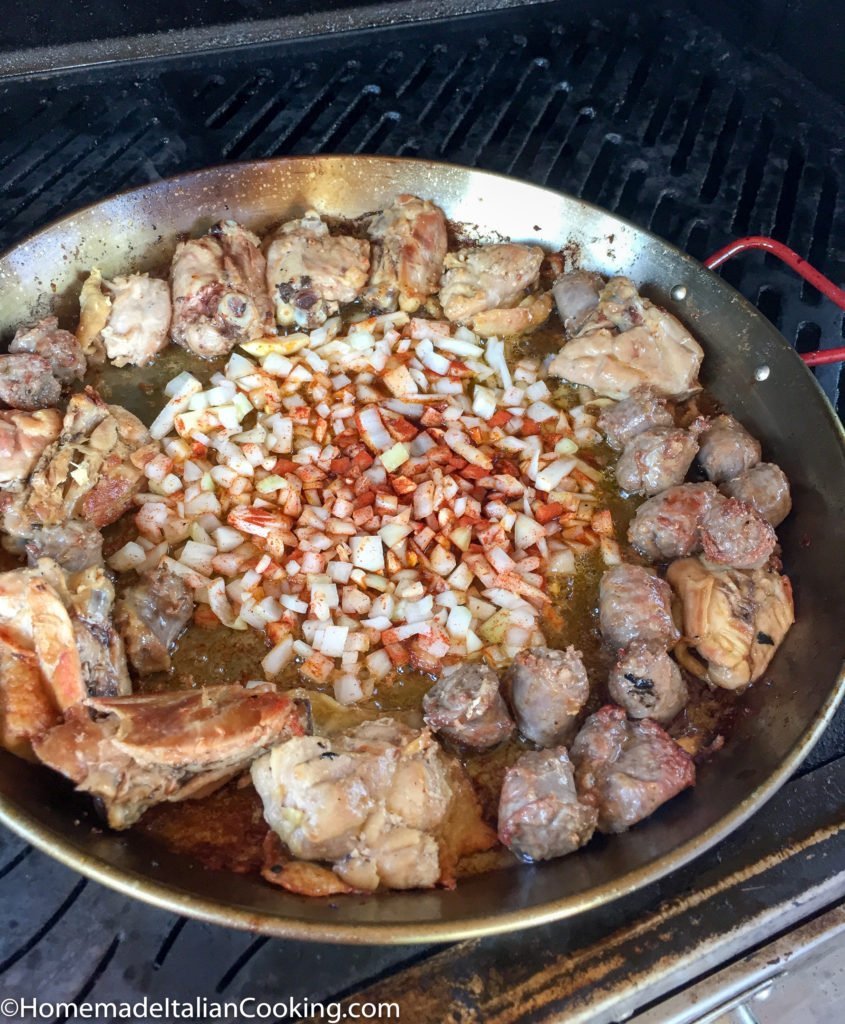 Add tomatoes and continuing cooking as you mix it all the together in the pan. 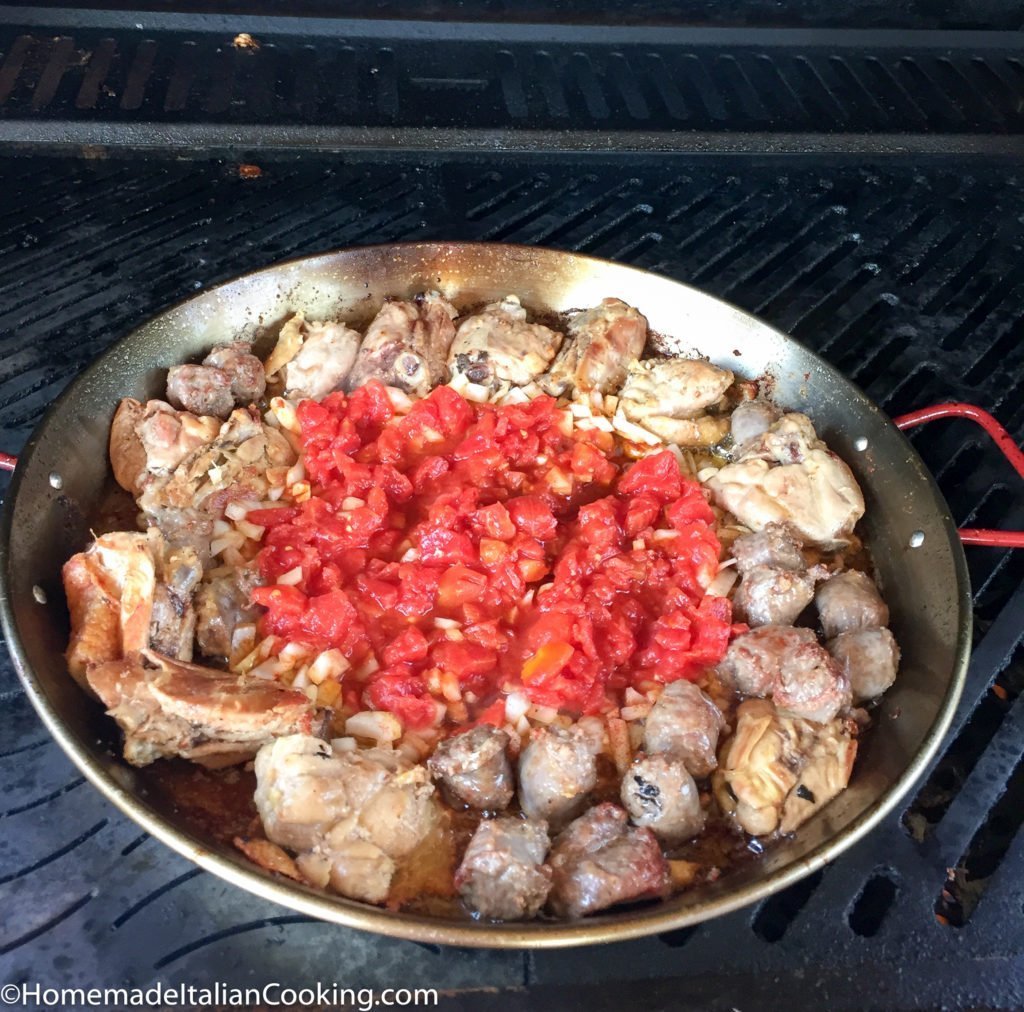 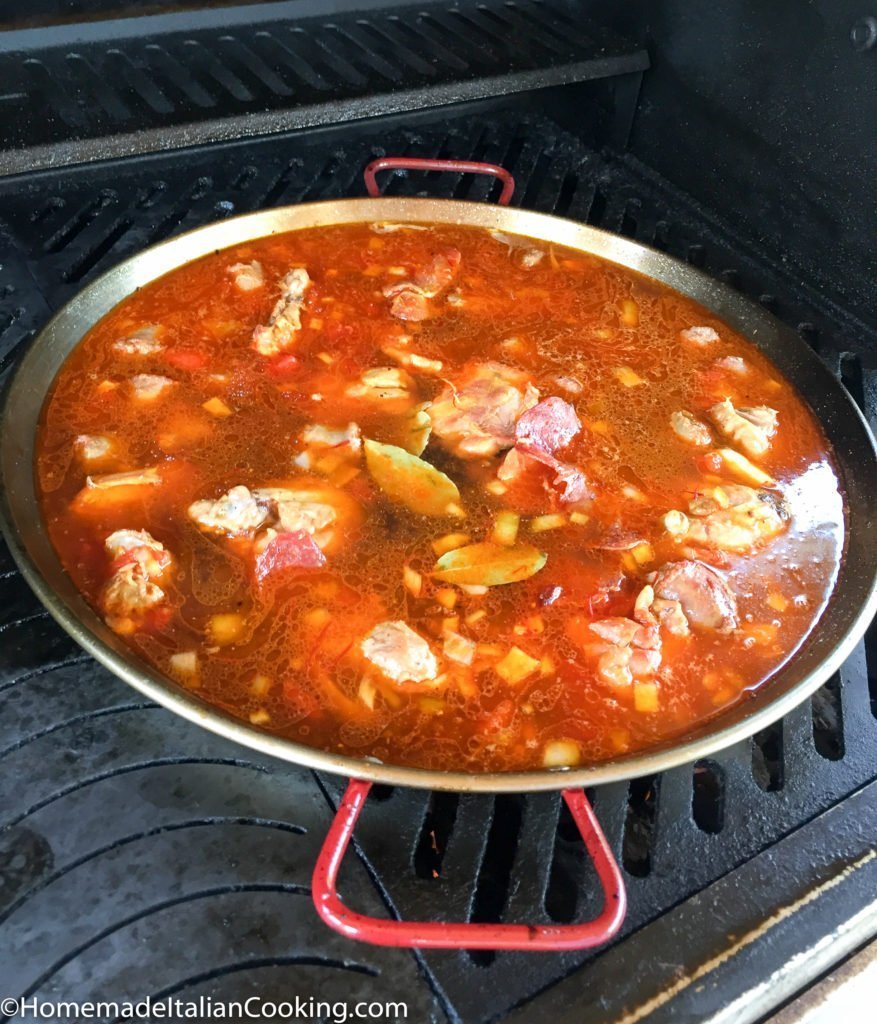 Add the chorizo back in the pan, and then add rice evenly across the pan. 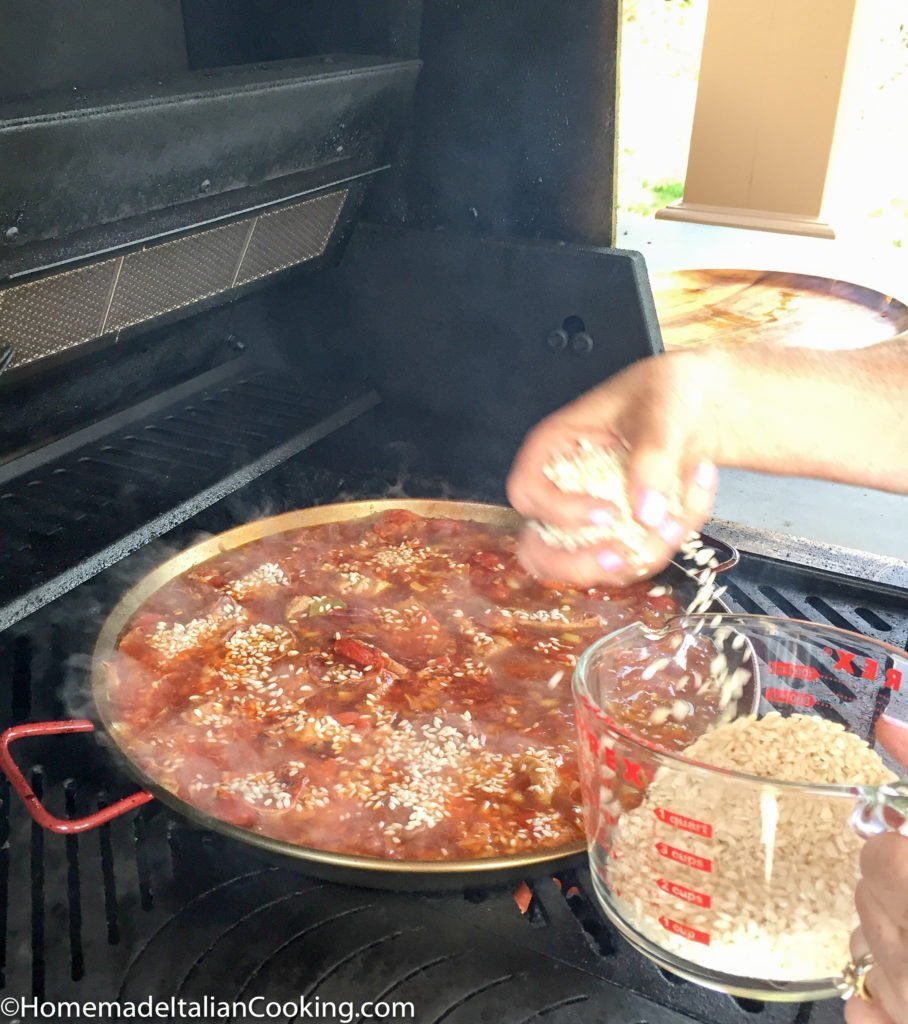 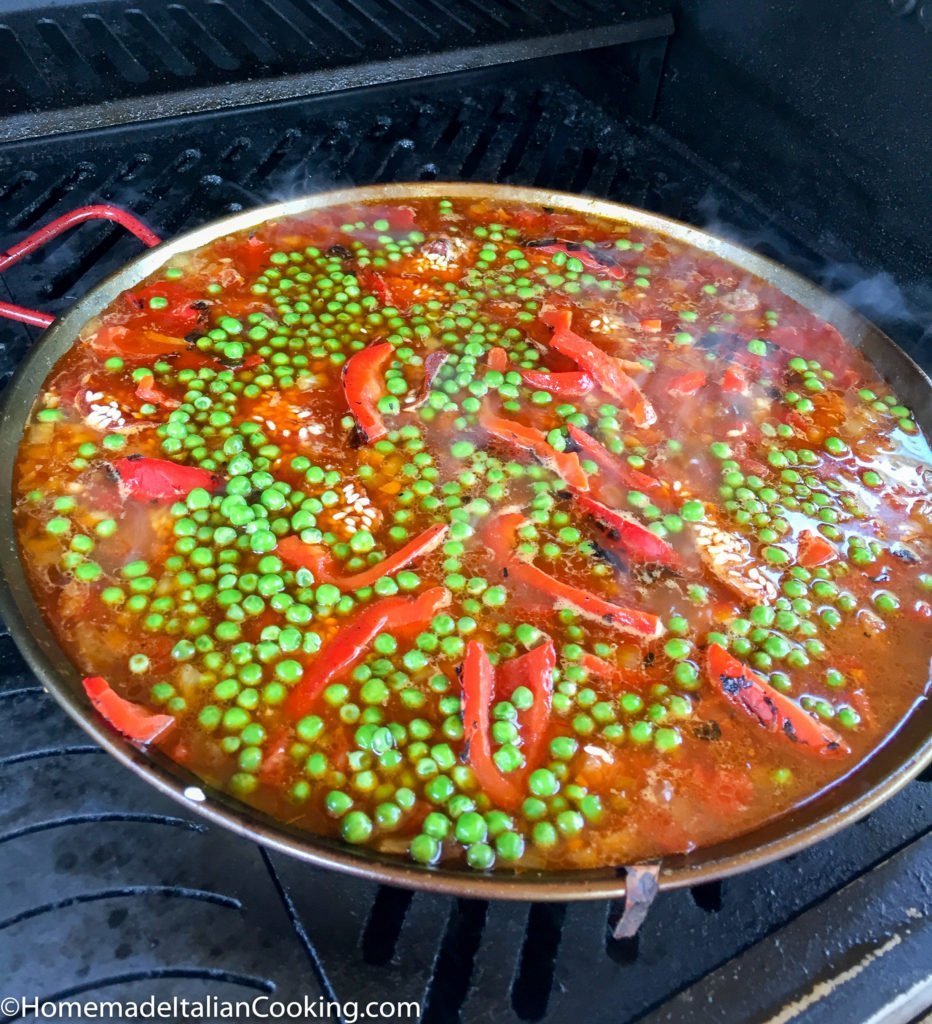 When liquid is almost absorbed, nestle and arrange seafood on top of vegetables. 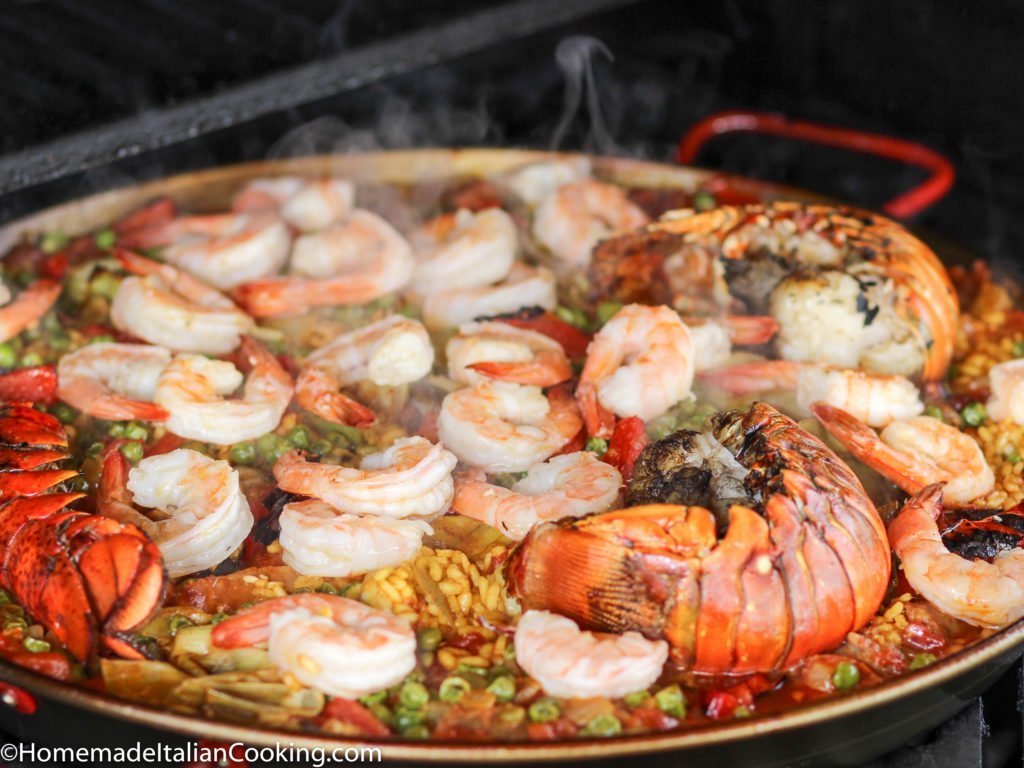 Close lid and let cook another 10 - 15 minutes or until liquid is absorbed and the edges looks crispy. 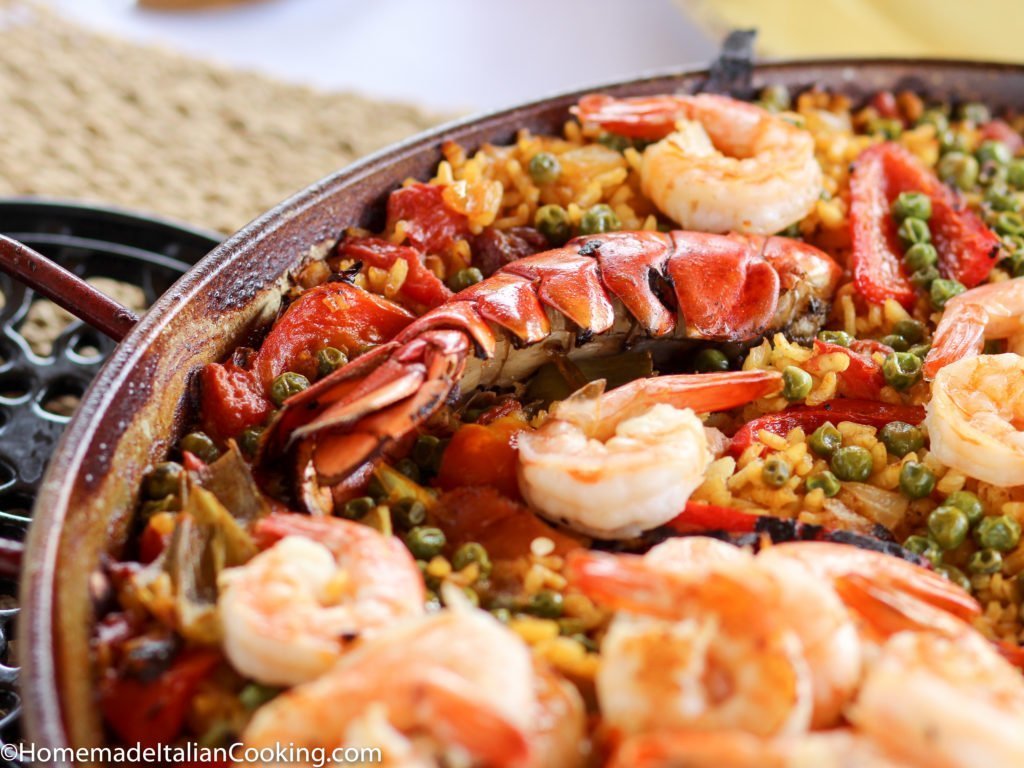 So back to the Spanish Grand Prix!

The Spanish Grand Prix is currently held at the Circuit de Barcelona-Catalunya in beautiful Barcelona and as one of the oldest Formula One races, it celebrated its centenary in 2013.  Barcelona is calling us as a food lover's paradise as well a Grand Prix racing capital. For foodies, it is said a stay in Catalunya is not complete until you’ve tried ‘Crema Catalana’, a Spanish version of French Creme Brulee.  I hope I can talk my husband into going to Barcelona for next year's Grand Prix and trying the some of the world-class restaurants.

The big question for this race is whether Scuderia Ferrari's Sebastian Vettel will 1) actually finish all the laps, and 2) can he finally get a win?  He has had a string of bad luck lately with an engine blown in Bahrain, and a debilitating crash with Red Bull in Russia. Rumors are that Red Bull will be replacing driver Daniil Kvyat with Max Verstappen after Kyvat was faulted for the crash in Russia.  Chris Hemsworth (Rush 2013) can't wait for the paella and the race either. 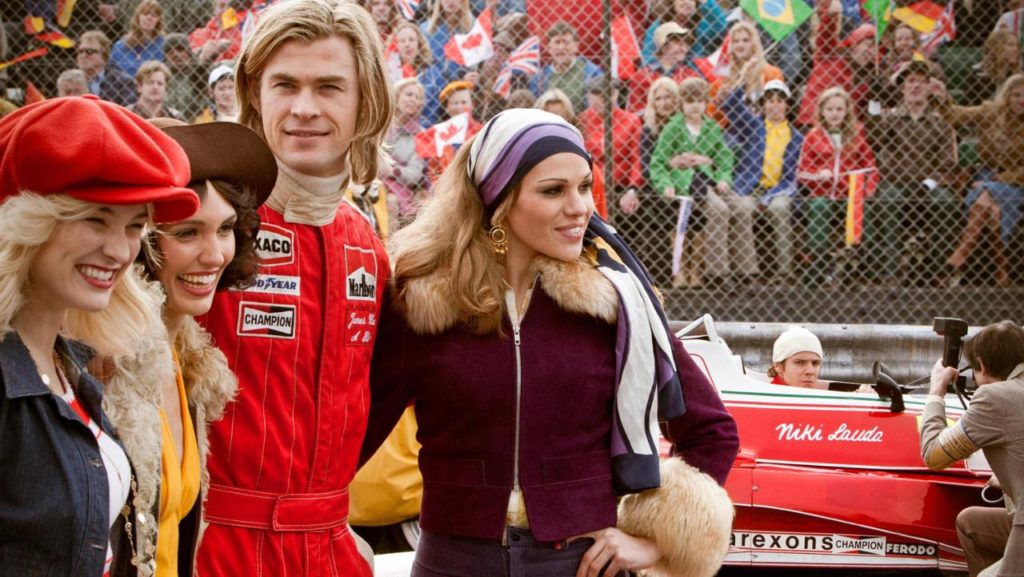 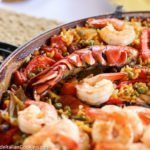 Spanish Paella is an amazing and easy homemade meal! Layers of seafood, sausages, chicken thighs, vegetables, rice, and spices are amazing when cooked on a outdoor grill. You will need at least a 16" paella pan or a large wide shallow pan. Get all your ingredients "mise en place" and start cooking. It takes about an hour or so from start to finish.
Course Rice Entree
Prep Time 1 hour
Cook Time 1 hour
Total Time 2 hours
Author Homemade Italian Cooking with Cara