Raspberry Pretzel Jello Salad is so good!  The salty, buttery pretzel crust is perfect with the creamy Cream Cheese and tart Raspberry Jello layers. My nephew called it weird but great. This is a popular recipe on Pinterest and I had to try it.  My version of a Raspberry Pretzel Jello Salad uses a double layer of cream cheese topping,  extra thick pretzel crust and lots of raspberries. It is very easy to make, just allow for time for each layer to set before assembling. By using frozen raspberries, it can be made all year long making it is a great dish to bring to a Fourth of July party or Christmas Eve buffet. 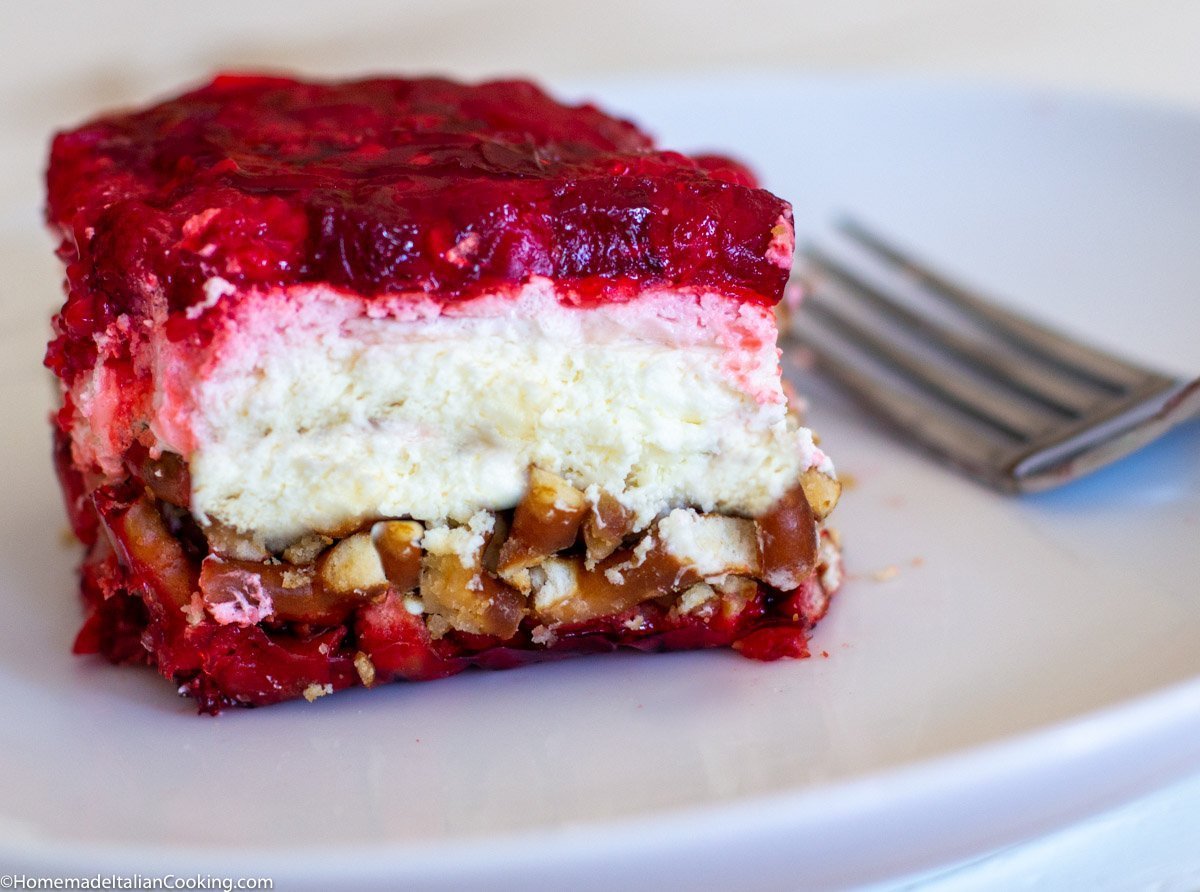 Here are my tips and step-by-step guide for Raspberry Pretzel Jello Salad:

Line a 9"x 13"x 2.5" pan with parchment paper for easy clean-up.  Next, crush the pretzels with a meat mallet in a ziplock bag. 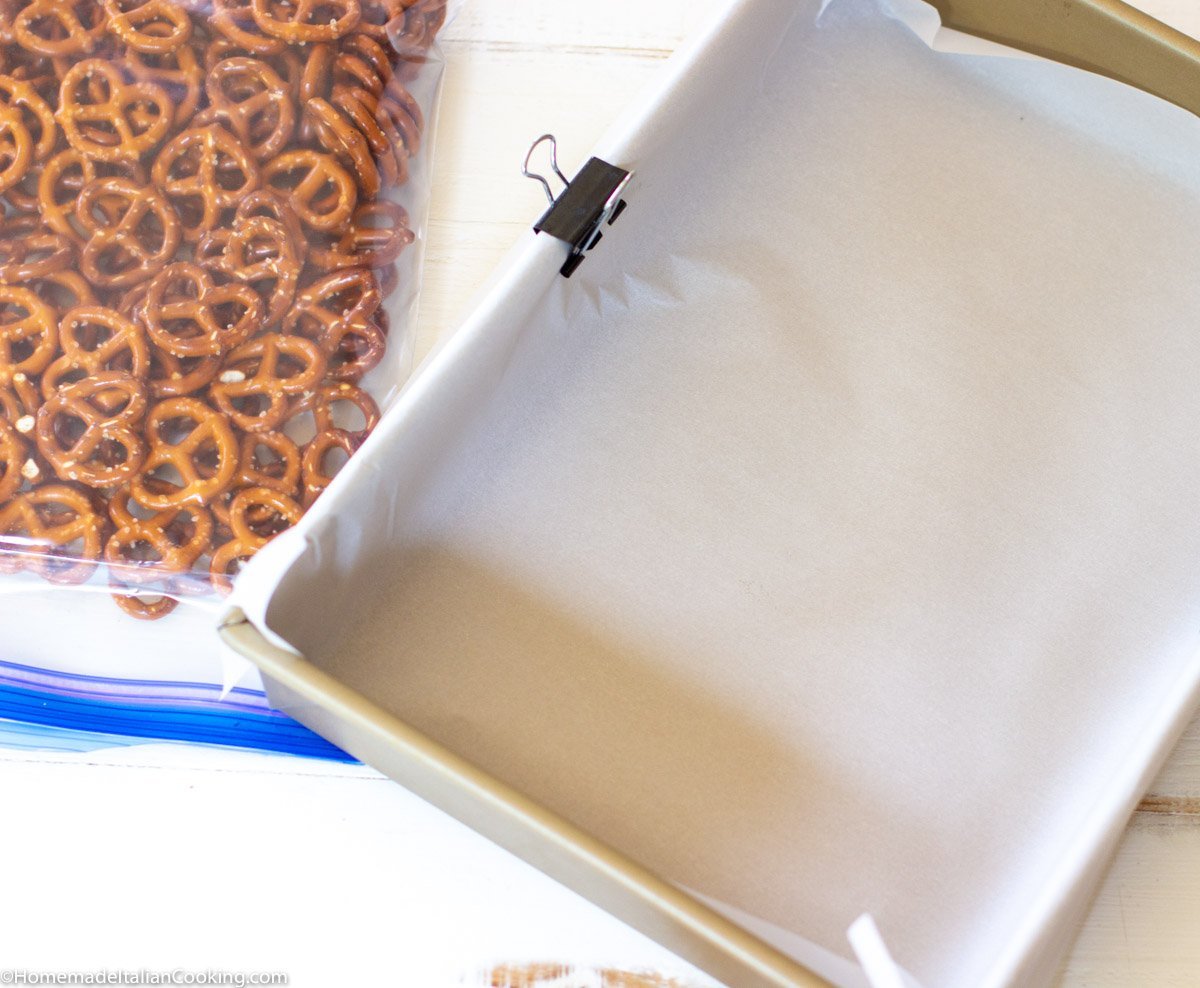 Mix the crushed pretzels with sugar and lots of melted butter. Press firmly into the pan to form a crust. The key is crush the pieces small enough to pack down nicely but still have a little crunch. This will make the cutting after chilled much easier. The ones shown in this picture should be crushed smaller. Bake for 8 minutes at 350 degrees.  It will make your kitchen smell divine! Remove from the oven and allow the crust to cool. 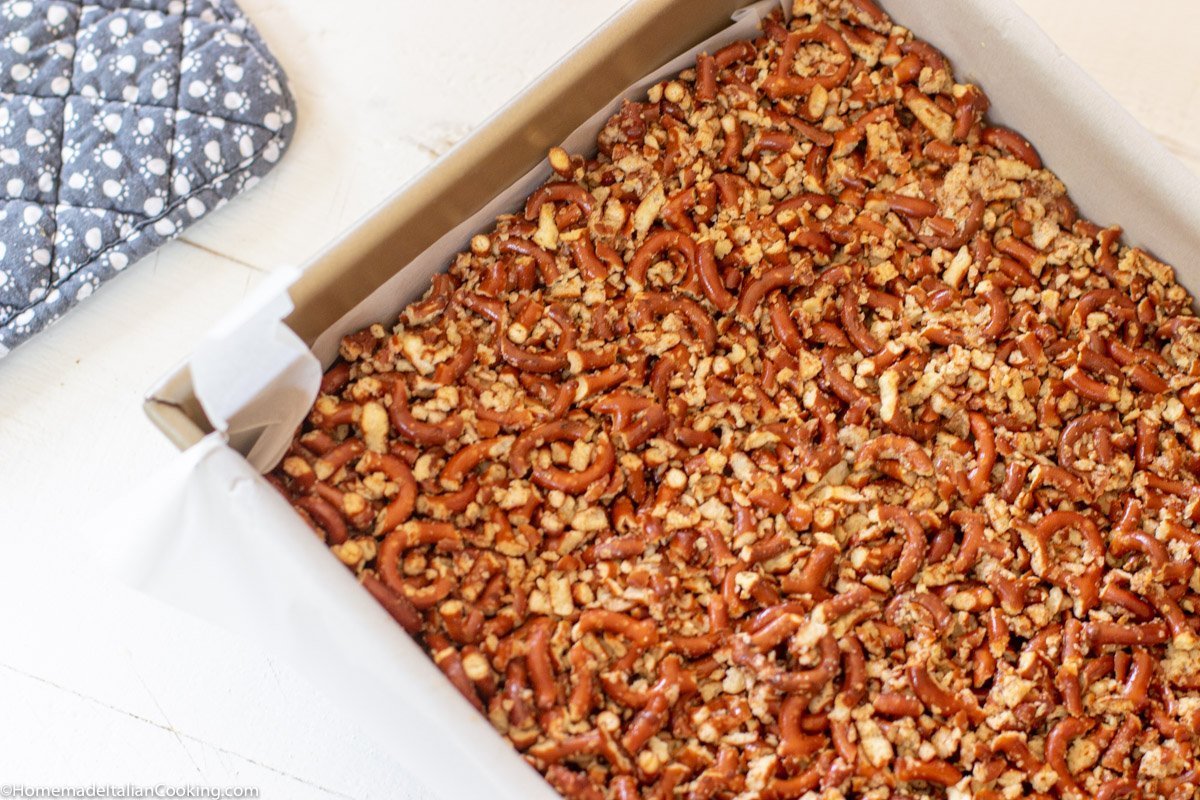 To make the cream cheese layer, beat the softened cream cheese and sugar in a mixing bowl. Gently beat in the whipped cream topping to create a thick and luscious sweet topping layer. 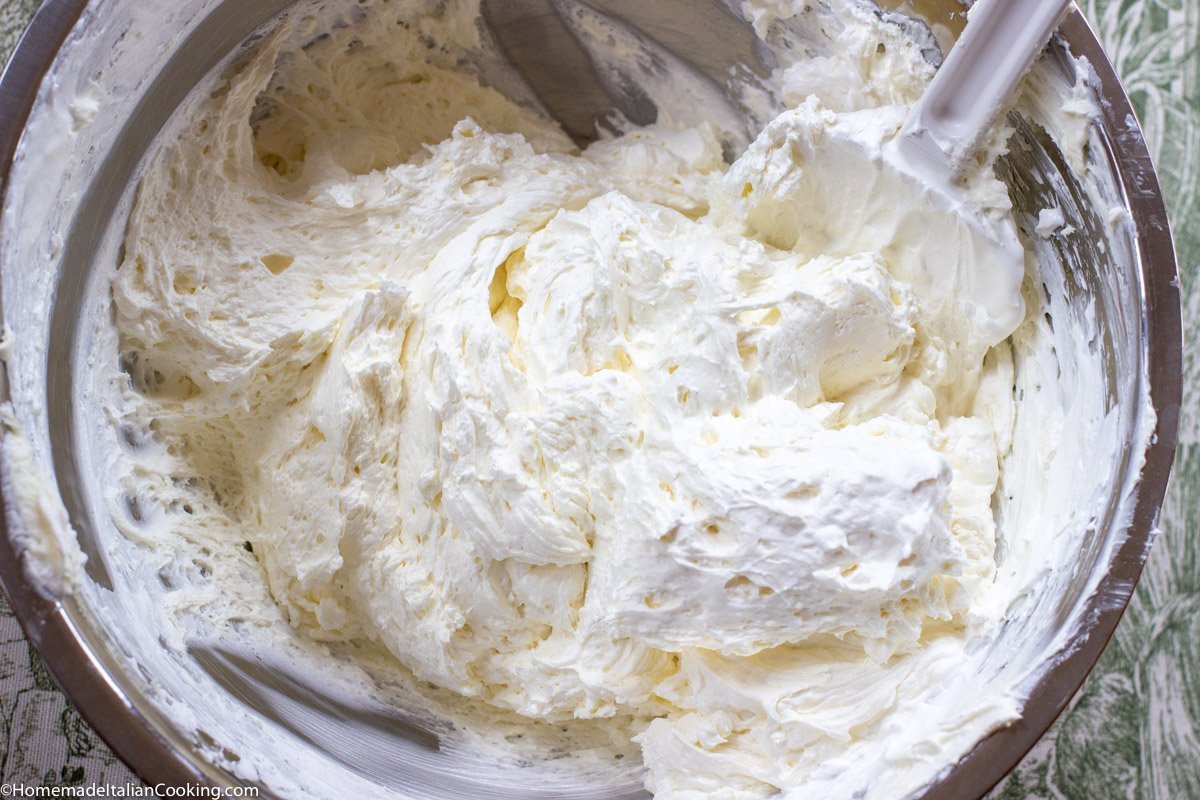 Evenly spread the cream cheese mixture over the top of the cooled crust. 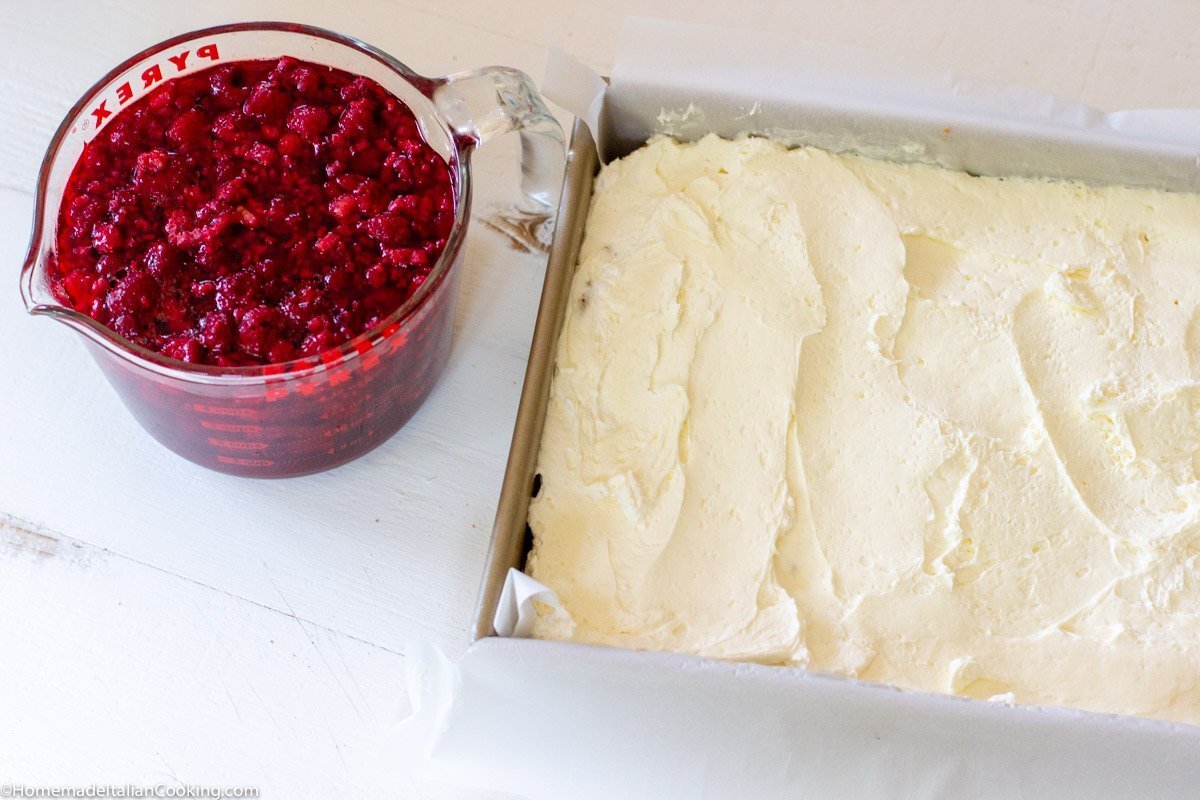 To make the raspberry jello mixture start with a box of jello mix, two cups of boiling water and 2 bags of thawed frozen raspberries.  Allow the dissolved jello to cool a bit and add the raspberries. Give a good stir. It should make about 4 cups. 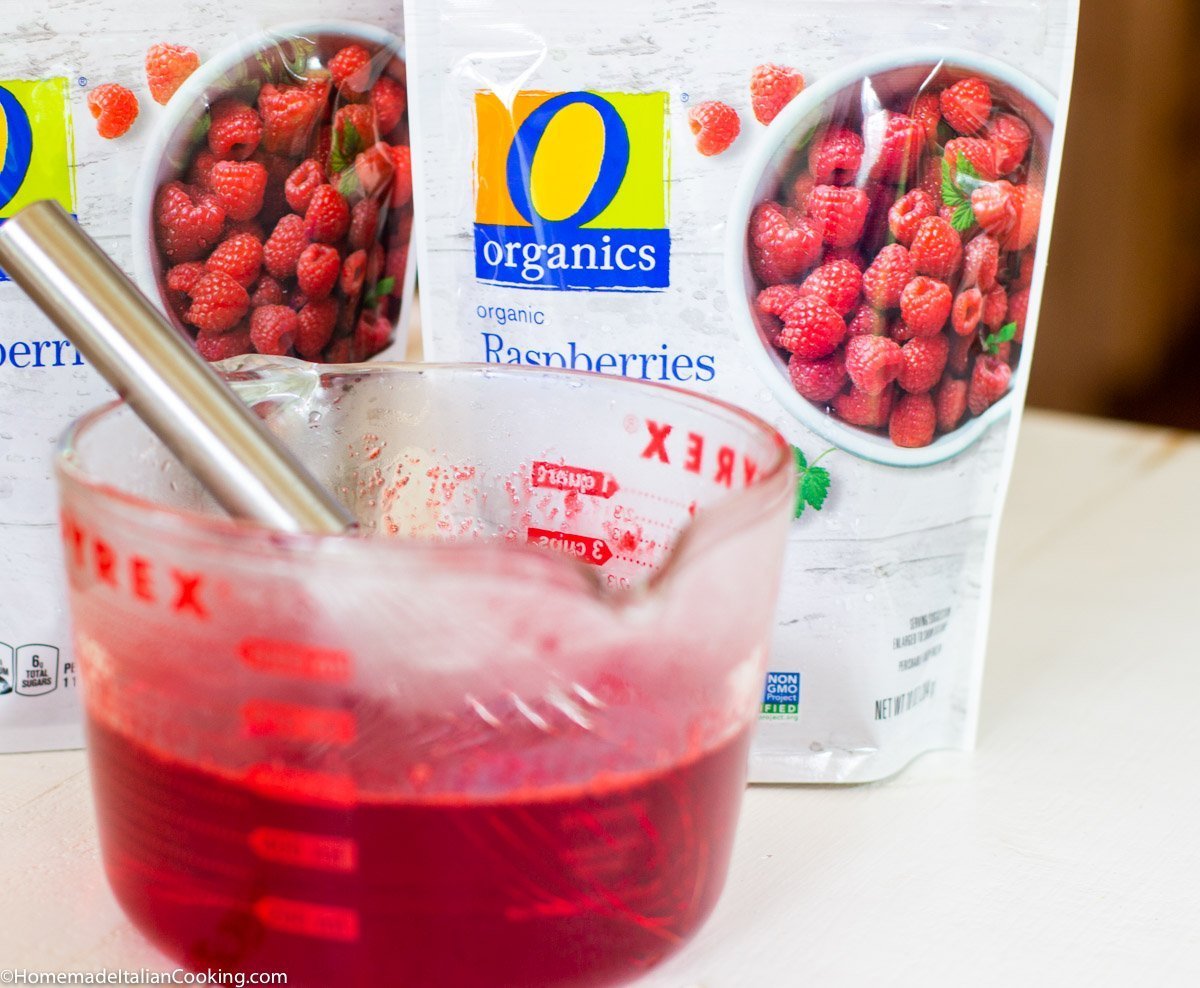 To assemble the final layer of the Raspberry Pretzel Jello Salad, ladle the raspberry jello over the chilled cream cheese layer. 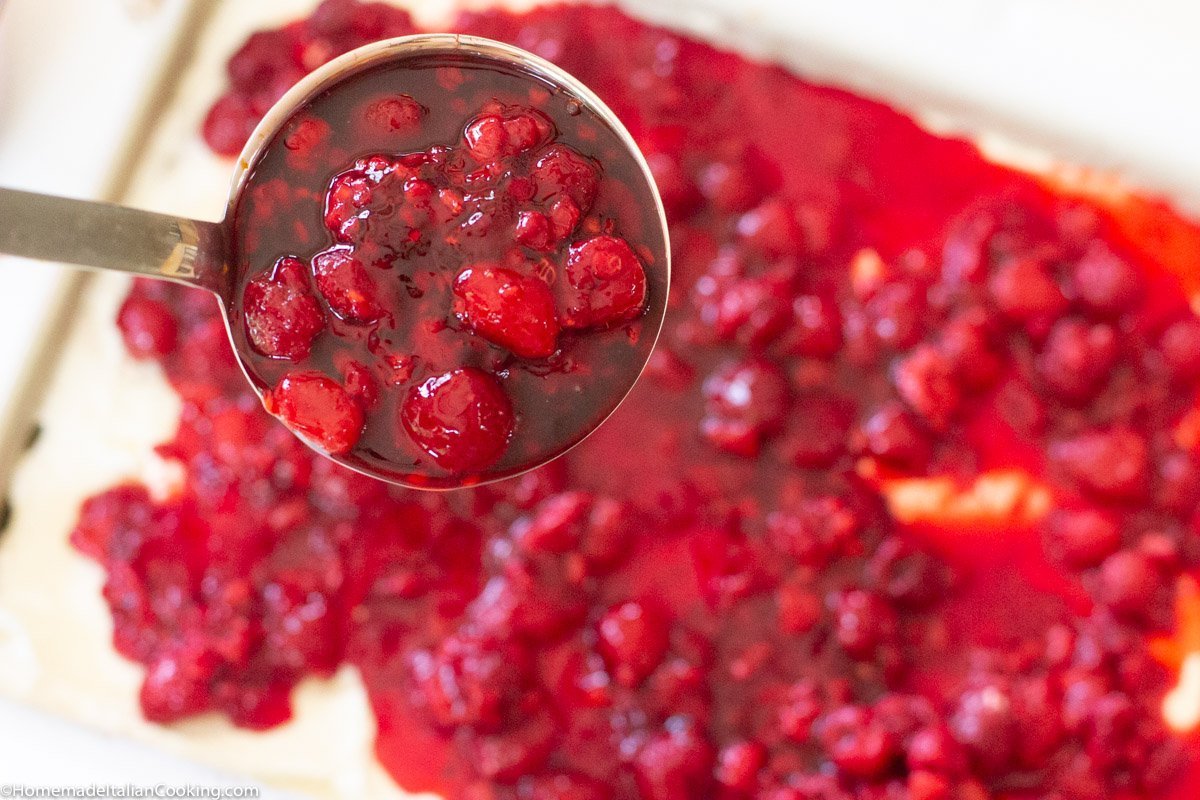 Cover with plastic wrap and let set in the refrigerator for at least 2 hours up to overnight. It is easiest to cut when chilled. 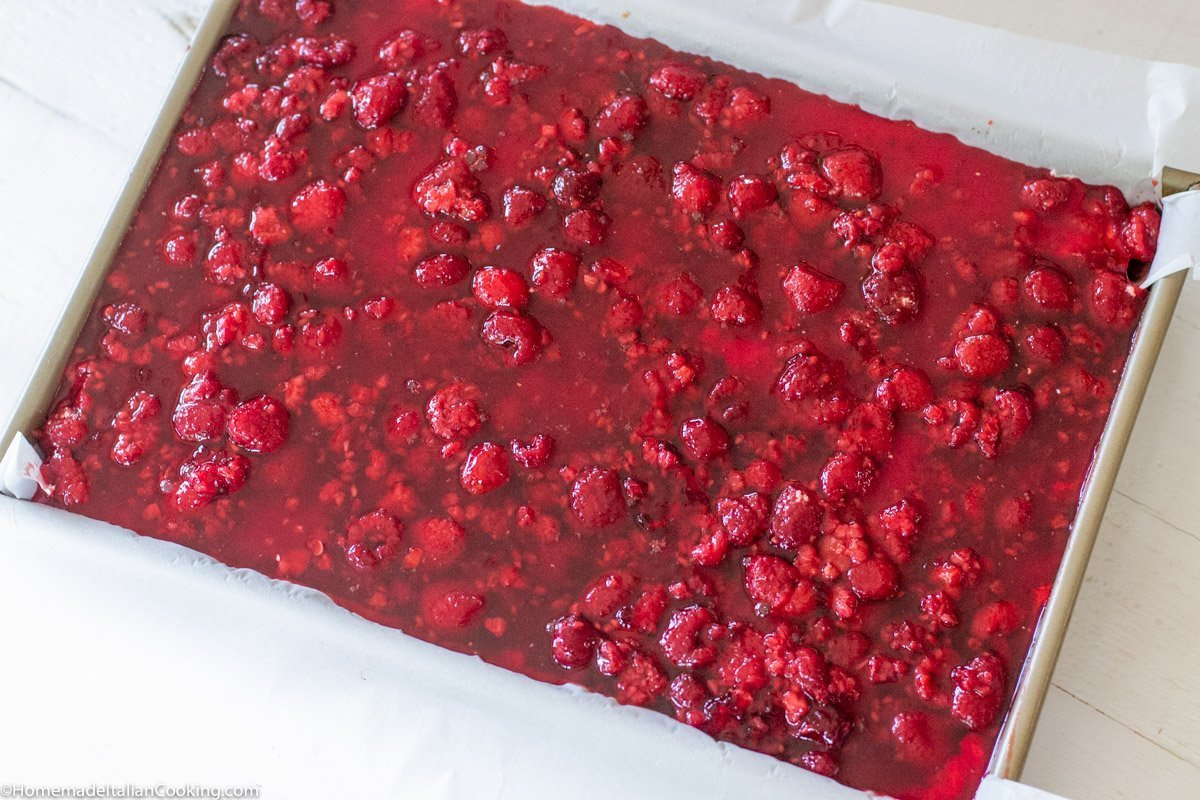 Serve the Raspberry Pretzel Jello Salad and enjoy as a salad or a dessert! 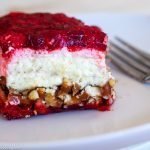 Note: This recipe was created for a crowd with thick layers and will fill to the very of top of the pan. You can substitute a 11”x17” pan but the layers will be thinner.
« Chocolate Almond Olive Oil Cake with Brown Butter Glaze. And it's Gluten-Free!
Cara’s Marinara Sauce with San Marzano tomatoes »